A dozen or so years ago my cousin Kathy called from DC and asked me to join her the following month for a Jewish women’s weekend retreat.

Because geography had always kept us apart,  spending a weekend with my cousin was wonderfully appealing and a women’s retreat would be a new experience for us both.

Kathy and I arrived on the beautiful grounds of the Pearlstone Retreat Center in Maryland on a Friday afternoon and met the 16 other participants and the female rabbi and young cantorial student who would be our leaders.  By the end of the weekend many of these women would no longer be strangers, and my cousin and I would become closer to one another.

We did so much that weekend – we recited prayers,  performed rituals,  and shared lively communal meals.  We discussed Jewish beliefs and traditions,  learned more about the Jewish matriarchs,  and of course debated Jewish feminism.  We meditated and practiced yoga and took nature walks,  and sang and danced and sat in a drum circle making music together.  And we women talked.

We were of varied ages and backgrounds,  a few like my cousin Kathy were children of mixed marriages seeking their Jewish identity.  Among us was a young woman whose wedding would be the following week,  a bereaved recent widow,   a woman going through a painful divorce,  and a mother whose young child had just been given a devastating medical diagnosis.  As if by tacit agreement one of us was always at her side,  talking or simply hugging her.

I’m not sure what my cousin and I had expected on that first retreat weekend,  but we headed home with a stronger connection to our own Judaism,  and an appreciation of the powerful bond between women.

Kathy and I went on retreat twice since then,  once our cousin Deb joined us,  and each year we came home feeling enriched and renewed.

Maybe next year we’ll go back with all our cousins! 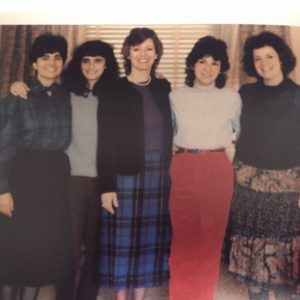