As you may remember,   I spent childhood summers with my family in the small Catskill town of Liberty, New York.   (See MY HEART REMEMBERS MY GRANDMOTHER’S HOTEL,  Dec 20, 2013)

What you may not know is that one of my beloved childhood pets – a cat with a beautiful gray coat named Smokey – spent many a summer with us at my Grandma Esther’s hotel.

Many years later that Smokey was followed by another Smokey who I once feared had been sealed up in our apartment wall!  Actually I had accidentally locked him out in the hall.  (See MISSING PUSSYCAT,  Jan 10, 2014)

But unlike Smokey #2 – who was a rather lazy apartment tomcat –  my childhood Smokey was a frisky female who had the run of our Bronx neighborhood.  She would climb the magnolia tree in front of our house and go in and out through my parents’ bedroom window.  Any night she found the window closed,  she’d meow until my father got out of bed to let her in.

Smokey obviously had many amorous adventures in those Bronx backyards and alleyways with many resultant  pregnancies,  and then we’d call around to find homes for her litters.  (Just a few years ago my childhood friend Suzanne reminded me that her family had once adopted one of Smokey’s kittens.)

One summer soon after we got to Liberty we noticed that Smokey was pregnant again.  A few days later she disappeared,  and we knew why – when a cat is about to give birth she seeks a private place to deliver her kittens.  We knew in time she’d parade them out proudly for us to see.

But early the next morning an irate guest rushed into the hotel kitchen looking for my grandmother.

“What kind of hotel is this?”,  she demanded.  “There are mice in my closet!”

Undaunted,  my grandmother lined a carton with towels and followed the angry guest to her room – for if you’ve ever seen newborn kittens you know they look very much like little mice.

My grandmother lifted Smokey and her kits into the carton and carried them straight to my room,  much to my delight.  Eventually the angry guest calmed down and actually became somewhat of a hotel celebrity for the unusual happening in her closet.

In September when we got back to the city,  my parents took Smokey to the vet and had her spayed.  That ended her nighttime trysts and Smokey lived out her days as a pussycat of leisure.

But I’ll never forget what a good mother Smokey was to all her kittens,  especially to those lucky ones born in a closet at my grandmother’s hotel! 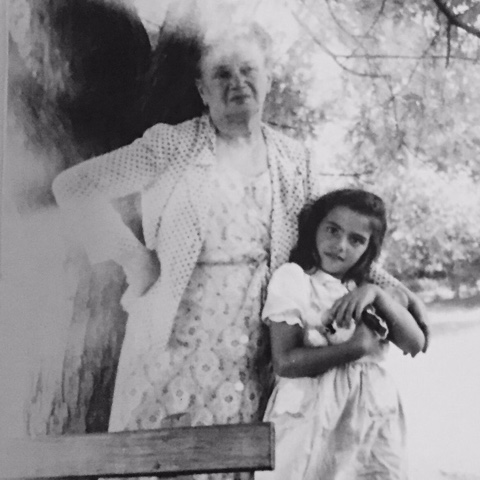