Years ago when our son was a toddler many of our friends began fleeing to the suburbs.  They couldn’t imagine raising a child in Manhattan with all the dirt and crime.

At the Met Museum five year-old Noah, wide-eyed at Arms & Armor,  or perched spellbound on the grand staircase watching a stonecutter etch a donor’s name on the marble wall.

And making Purim masks at the Jewish Museum,  and model dinosaurs at the Natural History,  and reading the skies at a kids’ astronomy class at the Planetarium,  and delighting when Red Grooms took over the Whitney.

And at a Chagall exhibit at the Guggenheim when he was two or three,  Noah pointing up from his stroller in amazement to show us “another cow that’s FLYING!”

And theatre and concerts – children’s shows at the Beacon,  and Dino Anagnost’s wonderful Little Orchestra,  and The Paper Bag Players and Mummenschanz at the 92nd Street Y.

“But we can bring our kids into the city for all that.”,  our smug suburban friends would say.

“Ah yes, ”  I would say,  “but if you needed a taxi in the rain and the wind was blowing your umbrella inside-out while you were trying to fold the stroller,  would your four-year-old raise his arm and yell “CHECKER”? 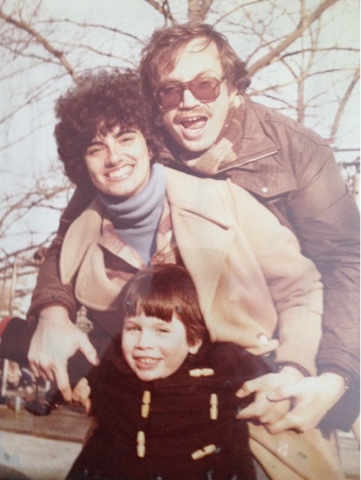