My parents’ first house was on a shady street in the Bronx bought after World War II on the GI bill.  My dad set up his medical office on the first floor and we lived on the floor above.    (See THE CORPSE IN THE OFFICE,  June 6, 2016)

A few years later my folks were able to plan an addition to the house to enlarge my father’s office and our living quarters,  and also finish the third floor attic where my sister and I would have new bedrooms.

My mother was an artist and drew up the architectural plans herself,  and they hired Joseph Bucco & Sons,  Contractors to do the work.  I was only six at the time but I remember Mr Bucco very well.  To me he was a gentle giant,  a big strapping man with a lilting Italian accent,  a perpetual smile and a contagious laugh.

He and my mother respected each other as fellow artisans and I can still see them,  heads together,  pouring over the blueprints spread out on our dining-room table.

And I remember watching in fascination as Mr Bucco and his two sons transformed our house,  sawing floorboards and mixing cement in our backyard.  And despite warnings of danger from the grown-ups,  I remember playing in the yard amidst a delightful jumble of tools, and lumber,  and bricks.

When the construction was finally complete,  my mother took a large nail and inscribed the year – 1950 – in the wet cement on our new cornerstone.   It was then time to paint the house.

“I want a warm,  rich,  light brown”,  she told Mr Bucco,  and so he brought her many paint color swatches to consider as they stood on the lawn looking up at the house.   But none seemed warm enough,  or rich enough,  or light brown enough to suit my mother,  and so,  anxious to please,  Mr Bucco began to mix the colors himself.

He persevered good-naturedly for quite awhile but my mother was still not satisfied when our cat Ginger chanced to saunter by.

“That’s the color!”,  cried my mother,  and scooping up the cat she sat down in a garden chair with Ginger in her arms.  Mr Bucco knelt beside them, and looking from his feline model in the chair to his paint cans on the lawn,  he mixed the colors until his patroness was satisfied.

By then Ginger was asleep in my mother’s lap,  oblivious to the decisive role she had played in our domestic quandary.   And still I wonder – were we the only family in the Bronx who painted their house to match the cat? 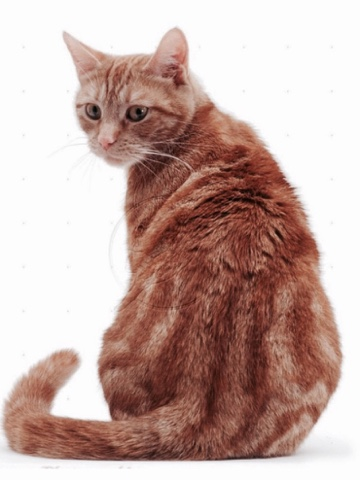