I love theatre and go pretty regularly,  often  with my fellow theatre-loving friend Babs.   And although we’re both pretty savvy about ordering tickets,  sometimes one or the other of us screws up,  and last time it was me.  Here’s the story.

For years Babs and I have shared a subscription to 59E59,  a wonderful off-Broadway theatre company on East 59th Street whose mission is to bring new and innovative works to a New York audience.  We usually love what we see there and were looking forward to the next production.

We checked our calendars and found a good mutual date.  I wrote it in my little date book and told Babs this time I would call to reserve our tickets.

The next morning I phoned and got a recording saying the box office hadn’t opened yet and to call back after 12 noon.  But apparently I got busy and forgot.

On the morning of the fateful day I called Babs to say I’d be driving down from Connecticut that afternoon.  Rather that meet first for dinner,  I said the tickets would be at the box office and we should meet at the seats and have a bite after the show.

Unfortunately I hit bad traffic and called Babs back to say I might not make the 7:00 curtain but would get there as soon as I could.

In fact it was close to 8:00 when I got to the theatre,  walked through the empty lobby, and asked at the box office for my ticket.  Hearing my name the guy at the window told me to wait a moment while he called the manager.

”Ah madam,”  said the box office manager,  “your friend said to tell you she left since we don’t have your tickets and tonight’s performance is sold out.”

”That’s impossible,  we’ve been subscribers for years and I called weeks ago to reserve tickets for tonight.  I even have it written in my appointment book!”,   I proclaimed angrily,  taking the little book from my bag and practically thrusting it in his face.

”Yes,  I understand you’re long-time subscribers,  and I see you wrote the date in your book,”  he said with the practiced patience of a box office manager,  “but it seems you never actually called to reserve tickets and unfortunately tonight we’re sold out.”

I realized of course he was right.

I called Babs at home to apologize,  afraid she’d be annoyed at me to say the least.  Her husband Bernard answered.

I called her cell phone.

”No problem,”  said my ever well-dressed friend Babs,  “Bloomingdale’s is open late tonight!”

(I’m glad to say we saw the show a week later and it was great!) 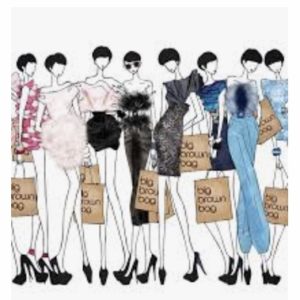