When our son Noah was young we spent several summers in the Hamptons in a rented house a short drive from both the beach and the town.

One summer my husband Danny invited his business colleague Stan to join us for the weekend with his wife Lynn and their two sons.

Noah was about five at the time,  and their sons Josh and Mikey were probably four and six.  The three boys played nicely together,  but I couldn’t help noticing that Stan and Lynn seemed over-anxious with their sons.  I think today they would be called “helicopter parents”.

Lynn slathered Josh and Mikey with suntan lotion as soon as we got to the beach,  insisted they keep their sun-hats on even in the water,  and changed them into dry bathingsuits as soon as they got out.

And Stan was very careful about what they ate and frowned when Danny barbecued hot dogs,  and when I offered the kids cookies and ice cream.  But we all were enjoying  each other’s company and having a lovely weekend when I told Lynn and Stan I’d made hard-to-get dinner reservations at a celebrated Hamptons restaurant for us,  and had arranged for our babysitter to stay with the boys.

I saw consternation on both their faces and they asked how trustworthy our babysitter was.  I assured them Janey was a lovely and responsible young woman,  had been sitting for us pretty regularly all summer,  and Noah adored her.   But I agreed babysitting three kids rather than just one might be a bit much for Janey,  so I called her.

Janey said she’d bring two of her friends who she said were excellent babysitters.   Three sitters for three kids sounded like overkill to me,  but I saw it reassured Lynn and Stan and so it was arranged.

That night Janey and her two girlfriends biked over to our house.  Lynn and Stan questioned them about their babysitting experience,   and gave them detailed instructions about allowable snacks,  TV watching,  and bedtime.  Then as the boys seemed happy with their three lively sitters,  we said good-night and left for the restaurant.

Returning late after a wonderful leisurely dinner we were surprised to see the lights still blazing in the house.  Once inside we found the three babysitters and the three kids sitting crosslegged on the floor watching TV and eating ice cream  – no PJs and way past the appointed bedtime.

“Why are they still up?  What’s going on here?”,  Lynn demanded of the three sitters almost hysterically.

”Oh,  it was easy,”   Janey said,  “we all have night lights on our bikes and we each took a kid on our handlebars.”

I saw Stan reach out to catch his wife in case she fainted. 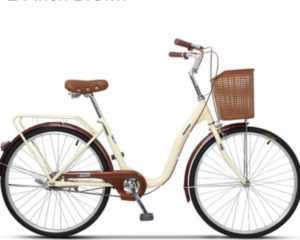