The answer may be in John Gray’s well-known book Men are From Mars,  Women are From Venus.   Or in another fascinating book about gender differences entitled You Just Don’t Understand: Men and Women in Conversation by Deborah Tannen.

Tannen,  a linguistics professor,  coined the word  “genderlect”  to describe the cultural differences between men and women that are reflected in the differing ways they think and converse – in personal relationships as well as in public discourse.

Years ago I heard Tannen interviewed and she spoke of the male aversion to asking directions.  She told us when her own mother read the book she said to Tannen  “I thought it was just your father!”

An incident that’s become legend in my family happened on a car trip we took when I was a kid.  Although in those days we used maps and AAA Trip Tiks  (remember those wonderful things?) ,  nevertheless that day we were lost

”Stop at the next gas station and ask directions.”,  my mother instructed my father who was driving. He refused,  and so she started counting aloud.

BTW I’ve heard that women ask directions even if they know the way – we just like to be reassured.  Sounds right to me,  doesn’t it? 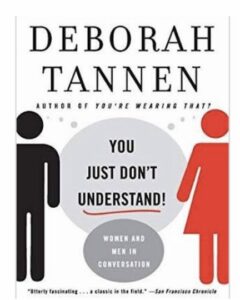