Since my friend Ethel died at the age of 85 early this year,  I’ve been thinking about what made her such a special soul.

We both lived on Manhattan’s upper eastside,  and for years we carpooled to school together.  Every morning,  reverse commuting against the traffic,  Ethel drove us the six miles up to Addams.

Originally there were five of us in our carpool,  each usually holding a paper cup of coffee or tea that sloshed around whenever Ethel hit a pothole.

Over the years two of our colleagues moved out of Manhattan and left the carpool,  and a third opted to drive himself.  Then it was just me and Ethel in the car,  and we began to think of ourselves as Thelma and Louise.

I remember one morning waiting on the appointed corner when I saw Ethel’s car approaching.  I stepped off the curb expecting her to slow down and stop,  but as I watched in bewilderment the car sped past me and disappeared up Third Avenue.

I trekked to the subway, and later at school I went to Ethel’s classroom to ask what had happened.

“I played bridge last night,”  she explained, “and this morning while I was driving to school I replayed every hand in my head.  I guess I just forgot to pick you up.”

Ethel,  as I said was a cosmetologist,  and because I wore very little make-up she was always itching to give me a make-over.  I always demurred,  but on one very special occasion she had her way.

It was the morning of our son’s bar mitzvah and my husband and I had arranged to pick up Ethel on our way to the synagogue.  As she sat beside me in the back seat,  she opened her purse and took out comb and brush,  hairspray,  lipstick,  foundation,  mascara and rogue.

And it was Ethel’s turn to shine at the surprise retirement dinner we threw for her on City Island.  The planning,  the elaborate scheme to get her there, and the look on her face when we all yelled “SURPRISE”  were almost as much fun as the party!

And then there were the strays.

Ethel was a real animal lover who badly spoiled her own,  rather plump dog Bambi who liked to eat ice cream.  My husband was once sitting on the couch in Ethel’s apartment when the dog  planted herself at his feet –  it was then he dubbed her Bambi,  the Coffee Table.

And it seemed Ethel felt responsible for every stray dog in the city.  One morning when she picked me up,  she was driving with one hand on the wheel and clutching the biggest turkey leg I’d ever seen in the other.

I was used to Ethel bringing leftovers from home and stopping the car to feed any dog who crossed our path – and what a lucky mutt who hit the jackpot that day!

And so if dogs go to heaven,  I’m sure they won’t go hungry.   I know one slightly dizzy blonde who’s waiting up there with a turkey leg. 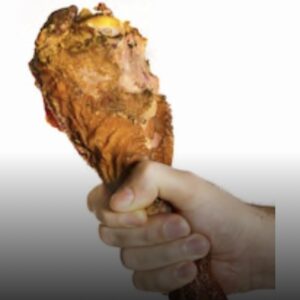